Update: Now includes a browser-based demo with some narrative so you can hear example audio & some samples from the downloadable "Game Speech Phrase" packs.

This tool is designed to make it easier to use the awesome offline (no cloud!) Text-To-Speech generation system Larynx in two ways:

Since it's not exactly trivial to get all this set up & running I've now included a couple of pre-packaged "Game Speech Phrases" packs for you to hear some of the voices & get some pre-made speech to possibly use in your games--maybe put some reverb on them and/or apply some audio filter(s) to make 'em unique for your game!

In its most basic form the script for your character dialogue looks like this:

But once you've decided on a specific voice for a character you can use this format: 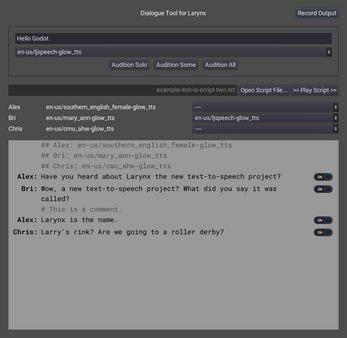 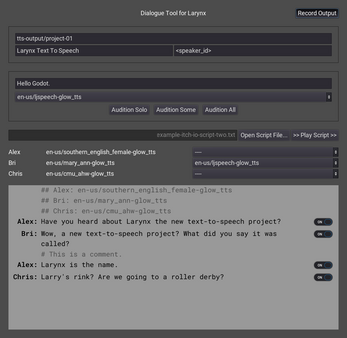